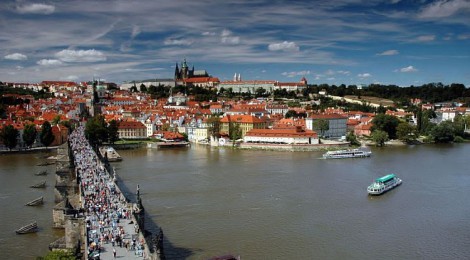 PRAGUE – the capital of the Czech Republic, has always played an important role in the history of the  country and Europe. Since the Middle Ages Prague has been famous as one of the most beautiful cities of the world and has been attributed adjectives such as “golden“, “hundred-spired“,  “the crown of the world“.

The unique character  of the city is also partly a consequence of its natural environment: Prague, similar to Rome built on seven hills, was built on nine hills along the Vltava river, which flows through the city for a distance of 31 km and forms a perfect unit with the city. The dominant features of the city architecture are reflected in the river: towers, church spires and cupolas, palaces and town houses, along with the greenery of gardens, parks and islands.

Prague was founded on the cross-roads of ancient trade routes at a site where the most varied spiritual and cultural currents merged. The history of the city begins with the founding of Prague Castle in the 9th century. Of the original stone buildings in pre-Romanesque style, a basilica remains from the second half of the 10th century, and forms the core of St George´s church. Among the preserved Romanesque structures in Prague, three renovated rotundas can be visited. At the time of the founding of the Old Town of Prague at the beginning of the 13th century, the Romanesque style began to be replaced with the Gothic; the oldest structure in this style is the Convent of St Agnes of Bohemia or the Old-New Synagogue, while St Vitus Cathedral, Charles Bridge, the Church of Our Lady before Týn etc. are examples of the prime of this style. The greatest flourishing of the Czech state occured at this time, which will eternally be connected with the monarch Charles IV, who founded the famous Charles University in 1348, the first university in Central Europe. The late Gothic style is connected with buildings such as Vladislav Hall, the Powder Tower and the Old Town Hall with the Horologe.

In the 16th century the Renaissance style started to be favoured by the court aristocratic circles. The first and truly representative structure is the Royal Summer Palace along with many aristocratic palaces in Prague. The Church did not favour the Renaissance art; on the other hand, it was completely taken over in the 17th century by the Baroque style. Especially the Lesser Town is characterized by the Baroque style and the Church of St Nicholas forms a predominant feature of this area.

A number of styles alternated in the 19th and the beginning of the 20th century. The most important buildings include the Classicist Estate Theatre, Neo-Renaissance National Theatre and Rudolfinum and the Art Nouveau Municipal House and Main Railway Station.

The period of the first half of the 20th century was influenced by the Czech Modern style and Architectural Cubism which was an original style, with no counterpart in contemporary international art.

Nowadays, Prague is an important European city that attracts visitors not only by the abundance of architectural gems the generations of our ancestors left us. It is a place where cultural, social and political events of international importance are held as well as a popular destination for trade fairs and congresses.