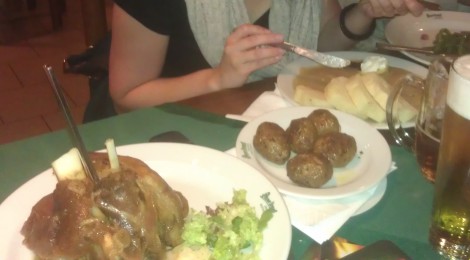 Czech cuisine is very markedly influenced by the geographical location of the country. The Czech Republic is a landlocked country with a cooler climate; consequently its cuisine has always been based on ingredients that could be grown at home, chiefly cereals, legumes, potatoes and meat.

Meat is one of the most important ingredients in Czech cuisine. Pork, beef, poultry, rabbit and game are used. Fish are mainly freshwater, chiefly carp, less frequently trout, pikeperch or eel.

Gravies and dumplings are Czech specialities. Gravies usually incorporate cream, butter and flour. There are many types of dumpling, for instance bread dumplings, potato dumplings or dumplings stuffed with smoked meat and even fruit. Soups are also popular in Czech cuisine as well as sweet pastries. Delicacies include open sandwiches, various salads, soft ripened cheeses (Olomoucké tvarůžky) or Prague ham.

Beer is an excellent accompaniment to Czech cuisine. Czech beer is world famous and has a long tradition. Czechs consider it a national drink. The best-known beers are Pilsner Urquell and Budějovický Budvar. Grapes are also grown in the Czech Republic, mainly in South Moravia. White wines in particular frequently receive awards at international competitions.
The bittersweet Becherovka liqueur, which is made in the spa town of Carlsbad, is also a popular souvenir with visitors to the Czech Republic.
Restaurants of all types offer their services to visitors to the Czech Republic: from the most luxurious through real Czech pubs to various fast food facilities.